Home > Blog > Prevention Of Rot > Ceiling Mold May Come From Inside

Home » Blog » Ceiling Mold May Come From Inside

Ceiling Mold May Come From Inside 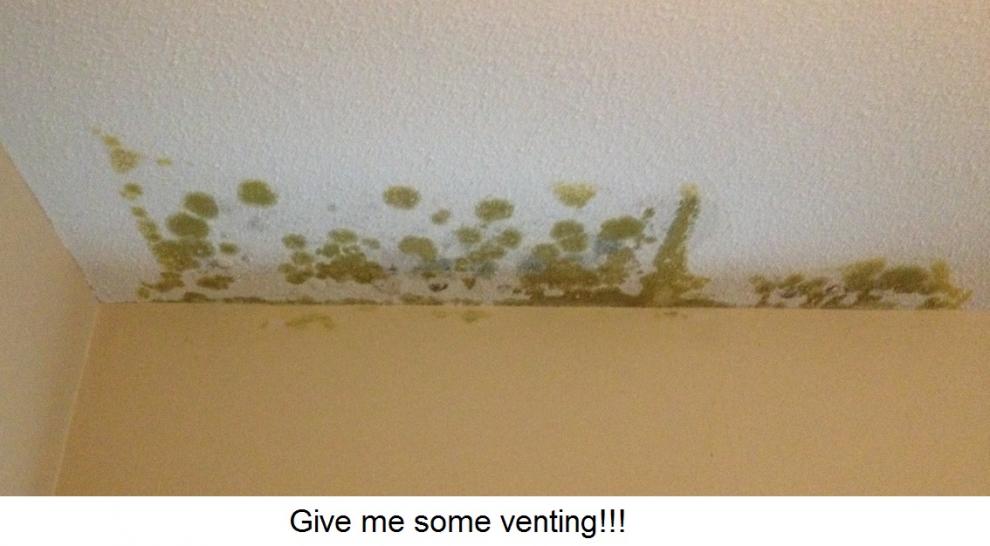 This is fresh in my mind – it happened again today! I received an email from a Property Manager we serve in Surrey, BC.  The owner had written that he needed immediate action to stop a leak in the roof which was making the ceiling wet in two rooms.  It was getting worse, so could we please attend the situation, find the leak and fix it?

Within a half an hour I was leaving to inspect the inside to find the point where the leak showed up, so that our workers could be directed where to look in the morning.   The photo above shows the worst of about 8 serious stains.   They had one thing in common.  All the stains were along the intersection between the ceiling and an exterior wall.

The likelihood of a leak acting like that is very low, especially at the outside corners.  There were two outside corners with mold stain.  There are a lot of places on a ceiling that are more likely to show a stain (from a leak in the roof) than along that line, especially when the line tends to go around each room.  What other signs were present?

A lot of people were in the small three story condo when I arrived.  There were at least three adults and four children. All these people need to use water to wash, and need to eat and drink, thus using kitchen taps.  Perhaps they boil water for cooking.  They all need to have clothing washed.  All these uses of water allow lots of evaporation, especially in a warm home.  Windows were all closed, and the heat was around 21 Celsius.  There were no vents working at the time, although the stove and bathroom had them.  They were turned off.

These stains are from a very active community of mold, and they are being fed by the humidity from a lack of ventilation and lots of moisture-laden activities in the condo.  It will be expensive to get rid of the mold and repair the paint job, but all that will do no good, unless the source is found and corrected.  There may need to be significant changes in the habits of the family, and, one way or other, definitely the moisture content of the air inside the condo must be reduced.   At the very least, the people should leave the bathroom and kitchen fan vents running, after ensuring that they are actually working.  They should open windows and air the home out once daily.  But more than this will probably be needed, because there is a lifestyle of enjoying water.  They will probably need to get a de-humidifyer that vents out through the roof, before doing any repairs.