Roof cleaning by power washing has destroyed a lot of roofs. The way they damage roofs while cleaning them is deceptive, because from the ground, the roof may look beautiful. Moss free, certainly. Lots of debris and growths are removed. Along with that, important ingredients of the roofing material are taken away too! Ouch! Do you want to invest in something that makes your roof look good but speeds its destruction? Then choose power washing. The high pressure removes the important uv protection, the granulation from asphalt roofs. This pressurized water system cleans away marginal wood cells on a cedar roof, and exposes all the flaws, leaving behind a trail that must be repaired properly, or your roof is doomed. The high pressure water removes important and valuable resin from cedar roofs too. The resin is the cedar shake preservative. On concrete roofs, it encourages chipping of the surface. Power washers have heavy hoses that are dragged around your roof. They do their own wear and tear, as do the boots of the workers as they grind over every square foot of your roof. Beware, also, water, at high force, being pushed in the wrong direction through corners and edges of protrusions, where the roof is the most vulnerable.

The most startling example of this situation happened at a home in Cloverdale. We were called in and had to re-roof this house immediately. The owner was in England for a few months, and the home was rented out. One of our customers lived next door, and was aware of the danger inherent in power washing. He saw a crew come and start to clean the roof with their pressure washers. They worked most of the day, then suddenly packed up and left quickly. The friendly neighbour called his friend in England. “Did you arrange to have your roof power washed?” he asked. The gentleman blew a fuse. NO, he fumed. What the heck is going on?

They figured out what had happened. The crew had gone to the wrong address. After working a long time, someone noticed the mistake. So they left quickly, leaving a roof that was barely holding together. There was so much damage that re-roofing was the only option. Fortunately, the insurance company covered most of the cost of the new roof. So I guess the owner came out ahead. Be afraid, be very afraid of “Roof Maintenance” crews showing how beautiful they make a roof look.

Beware claims these groups make, of super long life guaranteed, well worth the thousands of dollars they charge. If it sounds too good to be true, it probably is. 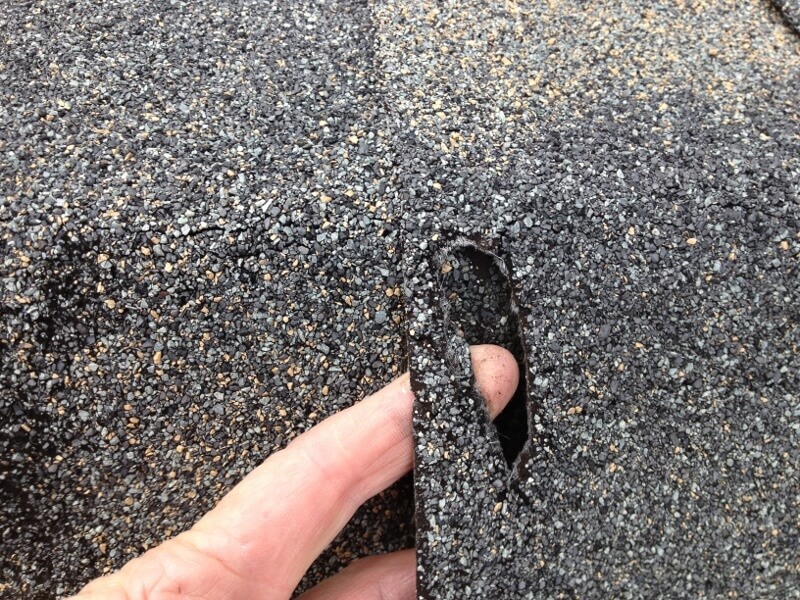 This hole in a 6 year old Architectural Shingle Ridge Cap (with a 30 year Manufacturer’s Warranty) was caused by a power washer “washing” the roof. 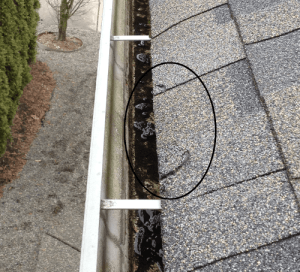 These three gashes in the starter course of a 6 year old Architectural Shingle roof were caused by using a power washer to clean the gutters. The high pressure stream touched the shingles and tore away the granulated surface, digging into the bitumen.

The RCABC and their Roofing Institute of BC are recognized worldwide for top quality. Quotes from the Roofing Contractors Association of British Columbia

“Without question, maintenance in the form of cleaning is essential for roofing of all types but especially for cedar, since it is a natural product.  High-pressure washing (with gas powered pressure washers) can do more damage than good by removing the pulp of the cedar itself.”

“Roofing product manufacturers and associations recommend not using power washing devices.  The force of the water can remove the surface or break away pieces of material, causing immediate leaks or shortening the service life of the roof system.”

“Care must be taken to avoid damaging the surface of the roofing materials. Damage to the materials or their surfacing will shorten the service life of the roof.”

Why Pressure Washing is Obselete!

Power Washers cause damage by:

Growths of algae come back erratically because of inconsistent pressure through the cleaning tip. The result is that ugly streaks begin to appear over time.

Academics Speak Out against them:

Engineers and tradesmen who specialize in roofing and building cladding advise strongly against cleaning them with Power Washers. Training institutions in the roofing industry teach this.