Home > Our Process > ROTban is unique and environmental friendly

ROTban is unique and environmental friendly

Why ROTban is neutralized by soil:

Naturally occurring solutions do natural things.  Nature has many extremes and they interact in such a way as to create useful climates, useful environments.  The acid/alkali balance is an important one!  We, at ROTban Corp, are very interested in the growth and effects of destructive microbes.  We study how they occur, their life cycles and feeding habits.  We have learned how to block their feeding habits and thus sterilize them.  No more harmful growth.  They need an acid environment, among many other conditions.  They utilize acids to feed.  Therefore they cannot feed on anything that opposes acid, and that is alkali.  That works fabulously.  The trick is to keep the alkali present for years.  That’s our proprietary secret.  Whenever excess ROTban gets off the target area, being carried off by rainfall, it can end up in water flow, streams, and in the soil around the building.  The beautiful thing is that there are no lasting residues in ROTban.  It’s a very pure form of Alcali.  You recall that where there is moss, mold, algae, fungus and lichen, there needs to be an acid environment in the rainwater, runoff, soil and pretty well entire surrounding area. So when ROTban contacts the water and soil, it’s quickly chemically neutralized.   That’s about as pure as you can get!

A case study of ROTban Runoff:

When rainwater comes off a roof or building, it may go into drainage or trickles of water that gradually form into tiny streams, and eventually into brooks and rivers.  We did a case study before performing our service at a Strata called Sullivan Gate, in Surrey BC.  There may have been a concern with its proximity to a fish bearing stream called Serpentine River, which was about 3,000 feet downhill.  When the math was done, it was clear that the tiny amount of our solution, diluted by all the other rainwater going the same path, the affect on the stream was not measurable.  Further, the problem with streams that run where moss, mold, mildew and all those growths are abundant, is that they tend to be acidic.  Most pollutants tend to be acidic also.  For example, acid rain comes to mind.  So if our solution was to have any effect at all, it would have been to reduce the acid by a small amount, improving the situation.  The calculations were checked by a chemist and found to be accurate. 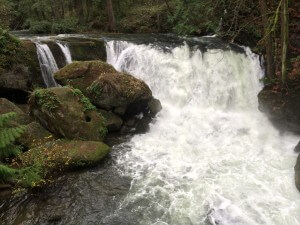 Fill out the form below for a free quote !